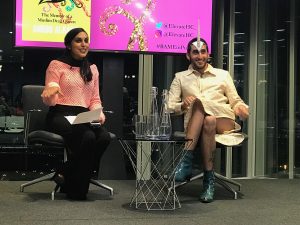 Last night I popped my BAME in Publishing cherry and went along to the rather swish HarperCollins building for an event hosted by HC’s new employee BAME group Elevate. It was a fantastic way to meet other colleagues in publishing and everyone was just so nice (although how is it that everyone in book publishing now appears to be 25 and a supermodel?).
The highlight of the night – unexpected for me as I don’t remember being told it would be happening – was the appearance of Amrou Al-Kadhi or Glamrou to give them their most apt name. The ever-awesome Sarah Shaffi interviewed Glamrou, journalist and Muslim drag queen, about their new book Unicorn. What they were wearing was just spectacular (see image above). But, before I get too Daily Mail and start talking just about a person’s dress, it was a funny, candid conversation about navigating the intersectionality of their experience. Amrou did a regular column for The Independent and said they found that it was often the case that left-leaning folks want Muslim writers to write on accepted Muslim stereotypes rather than permitting us to write whatever the hell we want. That part really resonated with me as I had that issue too. The only folks who really acknowledged how odd it is to only commission people of colour with reference to their background was regrettably (and weirdly) the right wing press but my own political sensibilities wouldn’t allow me to write for them (although it could be argued that Metro is owned by the most right wing of all the news organisations and I did plenty for them). I can’t unpack now why the left seem to ghettoise people of colour into talking only about their race or religious experience (plus that’s a massive generalisation based on my narrow experience), but I will say that the Q&A was terrific and I found myself nodding along throughout. 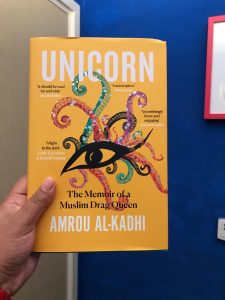 Most hilarious quote: “Gryffindor is definitely the most hereto-normative house.” This was in answer to Sarah’s question of “which house would you be in?” after revealing that they are a huge Harry Potter fan. They are Slytherin in case you were wondering.
Afterwards I bought a copy of the book (it is out on Thursday and I have begun reading it and must say it is great so far) and got Amrou to sign it for me. 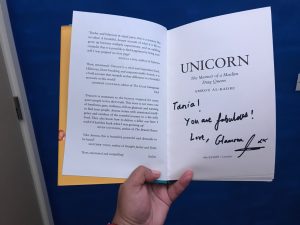 Afterwards I was speaking to someone and, of course, like a nan from the 1950s, forgot the ‘they’ pronoun for this wonderful non-binary person. “He’s fabulous!” I said. But then I saw that this was how they’d signed my book. No, no Glamrou, YOU’re fabulous.